Bitcoin Trading: what is it & how it works? 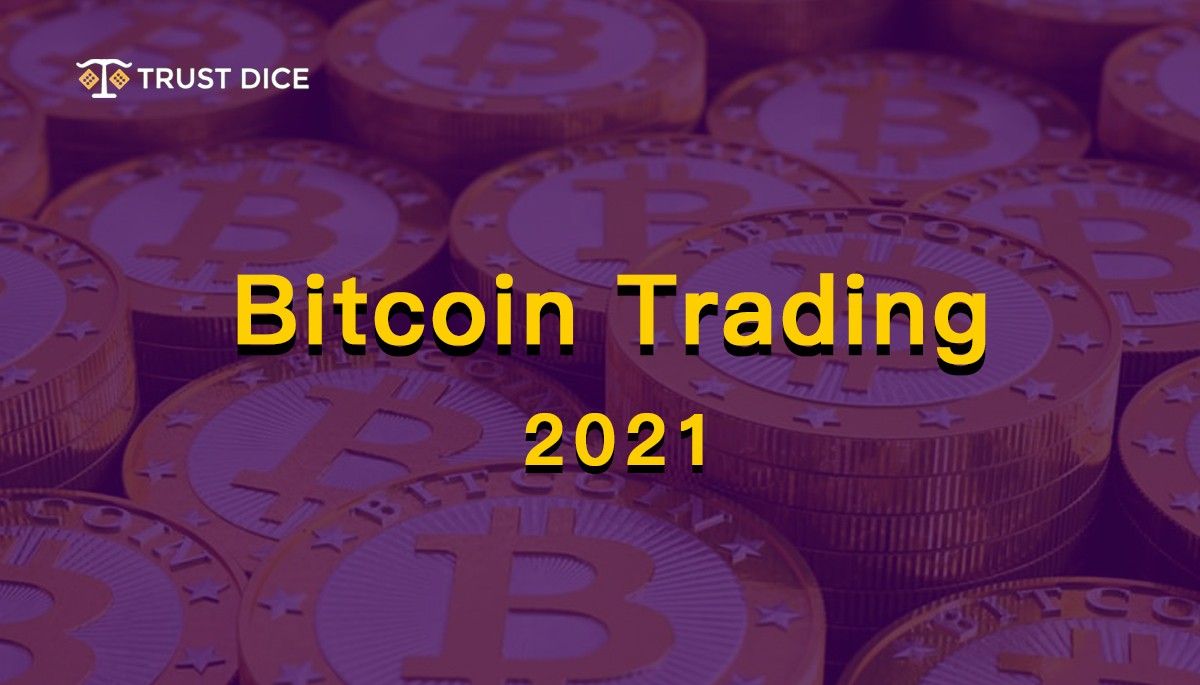 Since 2009 when the first Bitcoin was mined, bitcoin excites people and changes the world. Bitcoin has entered people’s mind and life. It’s 2021, people can even trade Bitcoin in markets and earn incredible amounts of money. Let's take our time and start with the main question.

What is Bitcoin Trading?

Essentially, trading with Bitcoin is like trading with USD or EUR, but you use digital currency to make an exchange between various crypto assets. You buy and sell BTC in the crypto-market, with several markets to choose like Bitcoin Futures, Over-the-Counter markets, and Bitcoin Options.

To fully understand Bitcoin trading, first, you need a general view of what trading is and its fundamentals.

Trading is the buying and selling of goods or commodities in several financial markets. These markets can range from equities, forex —foreign exchange—, derivatives, and bonds.

There are other kinds of markets as well, depending on the exchange or trading platform. For instance, some platforms will allow Over-the-Counter —OTC— markets, future markets, or options. The main and most used markets are:

The last market, Forex, comes in handy in order to understand Bitcoin trading. In essence, you are doing the same thing with currencies, but in this case, it’s digital currencies instead of fiat. The addition of cryptocurrencies into the market adds extra space for traders and investors who are keen to diversify their portfolios.

Before going into trading, you can check more about the advantages and disadvantages of trading with bitcoin.

How to do Bitcoin Trading?

As stated before, the essence of trading Bitcoin is the same as trading other assets in general —you buy and sell BTC in the crypto-market. The fundamentals of trading can be applied to Bitcoin using technical analysis. Although, keep in mind that major announcements and news can especially trigger major price drops or increases on Bitcoin. This also happens with other assets, but the inherent volatility of cryptocurrencies are to be considered carefully.

You buy when the price sits at a low level, and sell when the price increases considerably to take a profit out of it compared to your original investment. Consider the following: 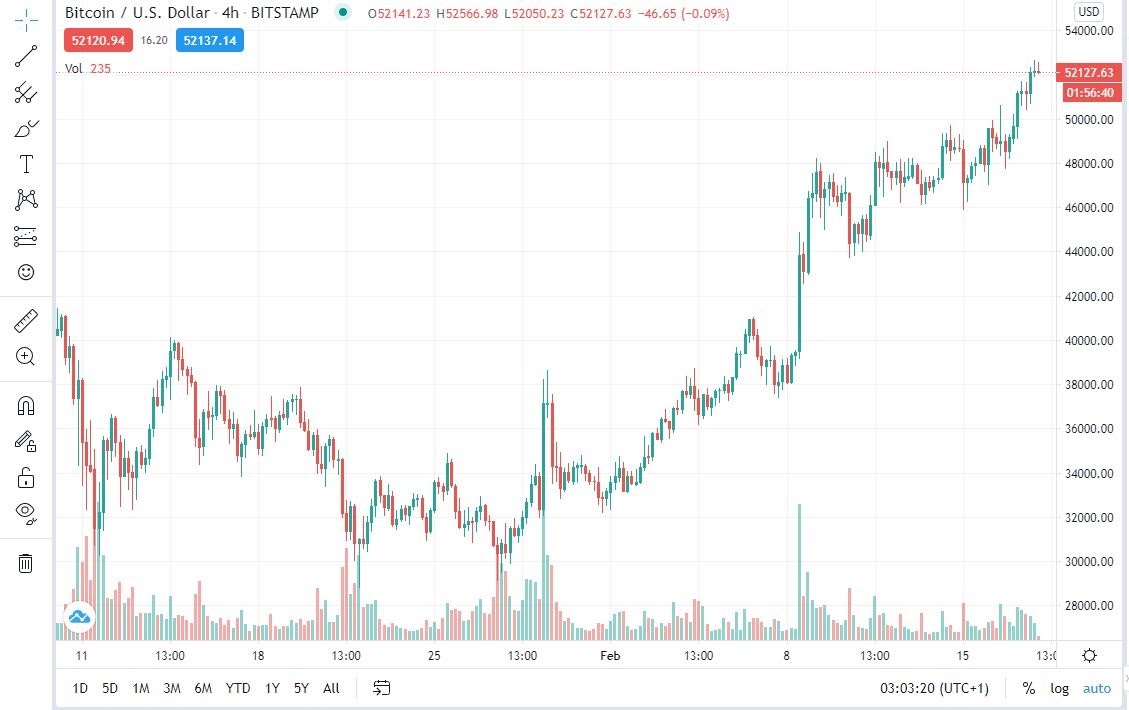 Notice the chart above: on a 4 hour basis, we can see extreme price swings. The inherent volatility of Bitcoin is a key element that can bring benefits as well as consequences.

Since January, Bitcoin was hovering between levels of $30,000 to $38,000 just after reaching a new All-Time High of $41,000, with no higher highs or lower lows. This is what is known as a consolidation zone —or consolidated market—, a moment where the price bounces from one price to another with no clear direction. 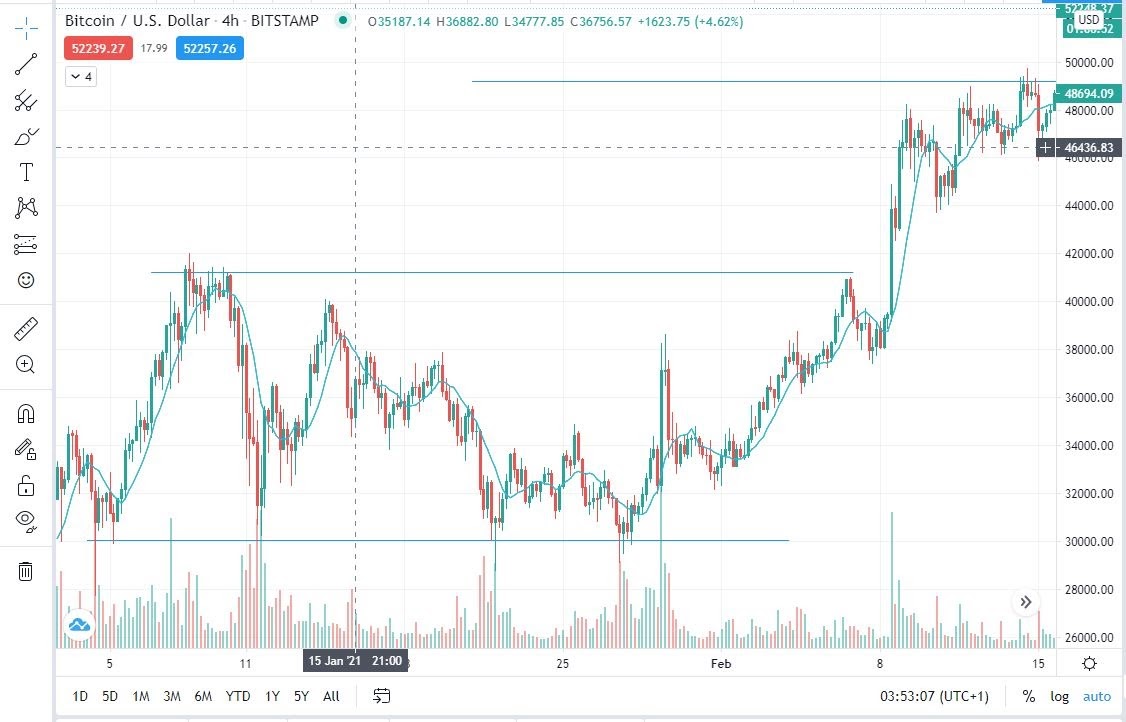 Notice in the chart above the price consolidation since it reached its peak on January 8. The price dipped more than -10%, entering a strong consolidation zone that swung the price between $30-38k levels before Tesla’s announcement.

The several price swings can offer opportunities to enter and exit the market quickly, but this requires expertise in the topic and knowing how to read the charts. Many traders saw an opportunity in the $30K zone, and entered the market again hoping the price would soon skyrocketed again considering the several institutional demands for Bitcoin. 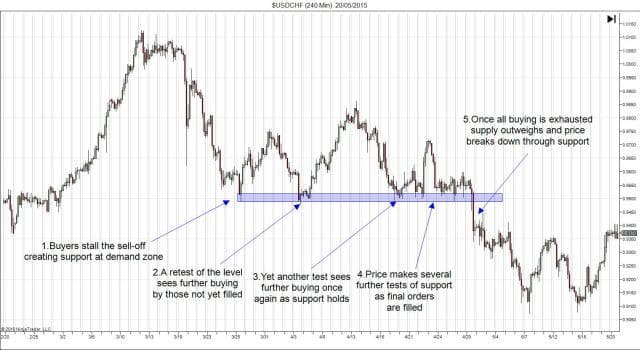 This is a USD/CHF chart, but the technical analysis works the same way for Bitcoin. Applied to BTC/USD, will have the next scenario: 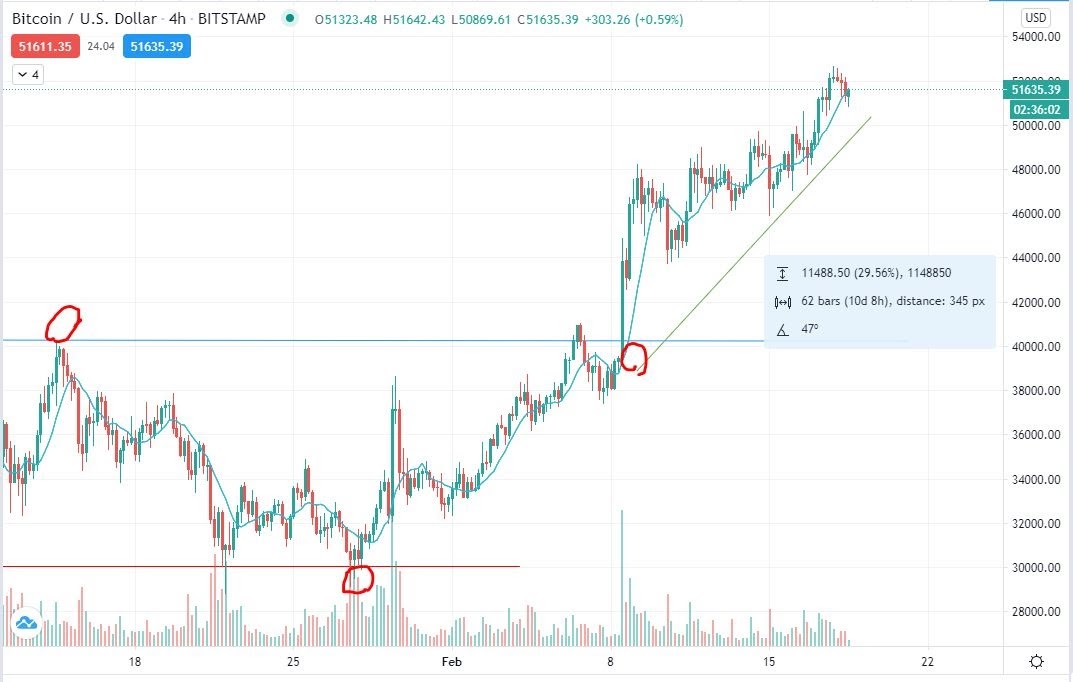 1) The price consolidates until something moves the market (news, announcements, etc).

2) The price tumbles and drops, which can be viewed as a price correction after a long uptrend.

3) The price doesn’t test that support level, rather, it continues its trend with speed.

Reviewing the charts, a $40-45K price could become an essential support level for Bitcoin. While you can make a profit out of the price swings in the red dots presented in the chart, it is always better to avoid consolidated markets and look for speed at price.

You can notice how the massive bullish candles on February 8, when Tesla made the announcement. The speed demonstrates the increase in demand —or panic selling if it’s a downtrend—.

This is why it’s important not only knowing how to make a proper technical analysis but also to keep an eye on what is going on with the crypto-market, as news can make powerful impacts on the price of Bitcoin.