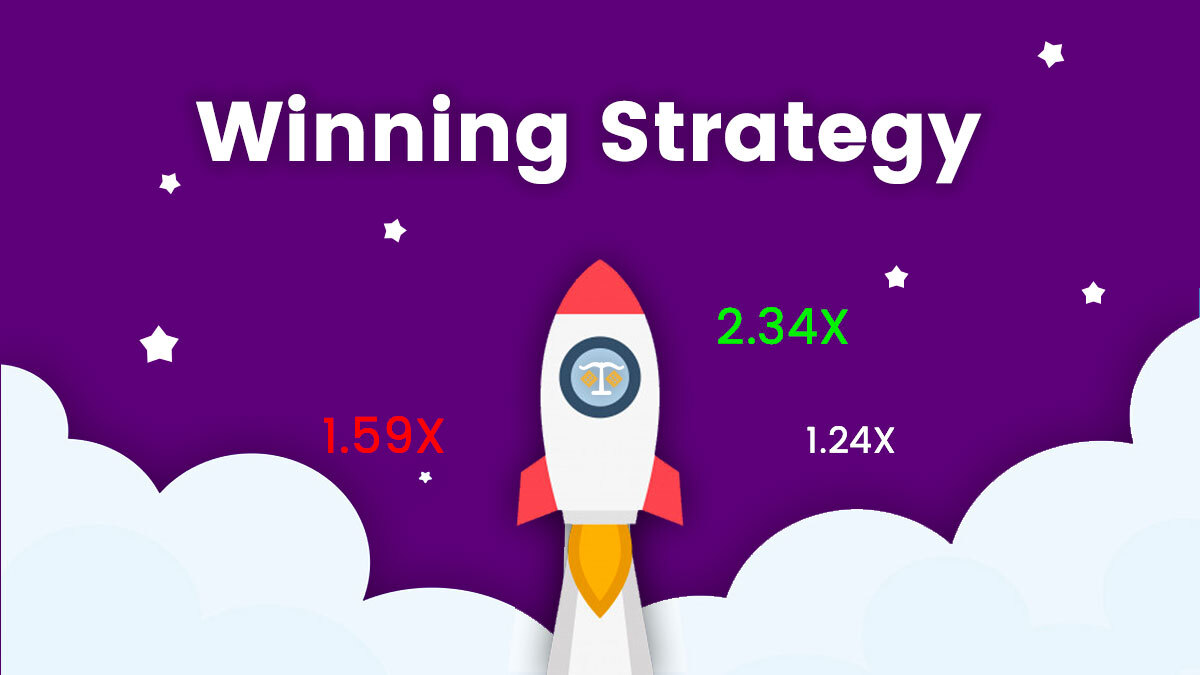 Crash gambling games have been on the rise for a while now. Although it’s already considerably easier to win in a game where you can see the house’s progress and don’t have to bother calling the bets of those irritating bluffers who go all-in in a last-ditch attempt to stay in the game, there are still things you can do to stay leagues ahead of the competition.

The simplest method is selecting an auto-cashout number such as 1.5x, and always collecting your profit at this amount. Or you could set your cashout multiplier much higher, for example 5x. This will mean you might win fewer bets but you will win big on these.

If you’re looking to play with little to no risk, play until you get a tidy win – and then play the following rounds with only the profits of that round. That way, you can be sure that except in rare cases, you’ll never be in the red.

No matter what platform you’re playing on, the RTP will never be 100%. But that doesn’t mean you can’t step away after a gaming session with huge wins.

In any Crash game, the house can only pay out so much – so if lots of bets have been won in quick succession by multiple players, watch out – and maybe sit a round or two out. When lots of wins happen one after the other, it’s safe to assume a very low Crash (such as 1.01) will be coming soon. Let the others take the fall for you, and you may be able to come back a few minutes later with your winnings intact.

Strategy 4) Shoot for the stars every now and then

You are the one who decides when you can cash out, based on the graph that you see skyrocketing in real-time.

Once you’ve hedged your bets and made some profit to play around with, try going for higher crashes – although the truly high ones will be few and far between, you can often walk away with 5 to 6 times as much money off of a bet simply by staying in the game for longer than the others.

There are also more complex strategies, such as the Martingale betting system, which in fact first developed in 18th century France. While the exact numbers involved tend to vary from player to player, the basic principle remains the same. If you lose a game, in the next round you increase your bet by a certain fixed percentage, and once you win, the bet decreases back to the starting amount.

The idea is that even if you make several losses in a row, an eventual win will not only recover these losses but in fact make a profit. Such a strategy is best suited for those with a large bankroll since losses will not wipe out your balance and so you can keep playing until you win. If you are doing this for the first time, here are the Martingale settings we recommend.

Go to “Auto” and “on loss” you should type “1.5x,” meaning after each loss your bet size increases by 1.5x. For “on win” simply choose the “return to base” option. This is a basic Martingale strategy, and you can tweak the numbers and decide whether you want to choose to auto-cashout once you have more confidence in this method. What are the risks of such a method? If you hit an unlucky streak of losses, you will lose money very quickly as the amount you are betting will keep increasing.

The anti-Martingale is yet another strategy, less well-known but equally effective. Some players believe that they have “hot” or winning streaks, in which they win several games in a row, as well as “cold” or losing streaks. To take advantage of this, after each win they increase their bet size by a certain amount, and after each loss they decrease their bet size, meaning they make lots of money on winning streaks and minimize losses on losing streaks. To implement this strategy, use the same settings as the Martingale under “on loss” and “on win,” but reversed. Under “on loss” select “return to base,” and under “On win” select the amount by which you wish to increase your bet size. The risks are similar to a Martingale approach.

Strategy 7) Pick A Strategy And Stick To It

Aside from every player’s personal strategies, there are well-known gambling strategies such as the Fibonacci strategy, the Martingale strategy, and others. Pick one and stick to it – switching them up mid-game may fudge the numbers and leave you confused. Make sure you stay on top of the numbers at any given time.

It sounds very obvious, but this is a problem of people who gamble. They can’t control their emotions. If you do, you will gradually increase your balance. In moments, when you have bad emotions - it’s better to stop the game for a while and have a rest.

Obviously, there are plenty of ways to play the game and hopefully come out on top – but these strategies may help you walk away from the table closer to that Lamborghini you’ve been dreaming of more often than not.